Our second show in this town, the club was nice attitude great , the band was in fairly good shape we were told that the show was sold out, so how much better it could be.

This was my second show before i join the Starlight Searchers and erase Louie Fontaine from the poster, so it was a big night for me , i played 13 years in the same pants and now its was almost over, i was ready to give the Russians what they wanted and i did, and i did it good, the crowd was real good and loved us, it was a bit Beatles like feel. 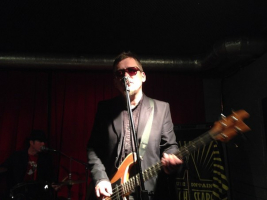 After the show we were taking to a back room for dinner, which nobody in the band seemed to have much interest in so we took that with us and began to drink instead for the 3 day. Alot of fans around us in room, then suddenly a fight started EK got involved holding back the guy not much success, it was one mad guy who was walking, around looking for trouble the chairs started to fly, nothing happened after little while all was under control.

The party moved to our beloved golden tour bus, which got packed with people, we got some weed and vodka of cause and talked to people, i was hanging with a beautiful girl called Tanja and the singer from the last show that warmed up for us, people were running after the truck when we left, we for sure will return soon enough to Kaliningrad it’s great town they love Rock’n’ Roll.

The owner of the club had promoted the show well, people came and they loved us to very end of the show the, version we better than the old ones, people liked them a lot. 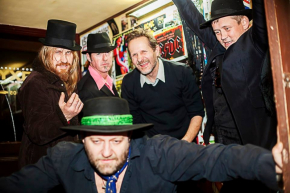 After the show and signatures the owner feed us well with Whisky and we went to the hotel the owner bought a new bottle of whisky, and we got in trouble with the receptionist because of smoking in the lobby, so we left trying to find a restaurant, which we did in the end, Martin had hired a private taxi driver to stay with us all night he showed us a local restaurant/bar, we ate and drank more.

American John wanted some American food so we went to MCDonalds and over did it a bit a full bag, probably about 5 kg of junk, we went to the hotel and started arguing who will sleep with who, I ended on a small fold out bed, which was completely destroyed when i woke up i was on the floor.

Out side that night was a huge windy storm, so our hats were flying 100 meters down the street several times, at least we got exercise which was needed with the drinking level we had that night, it was another good night with empty credit cards.

The band had were extremely happy to see each other after our time apart.

Somebody had some Mary Ann Tobacco and that worked well on all of us, we added 2 bottles of rum maybe more, and the rehearsal began, nobody wanted to play the songs like they use to be, it all changed, and we ended up rearranging Lunch From A Can and Let Me Die and took the new versions on the next day program, it got real late as matter a fact we did not really sleep at least i don’t remember about that.

Manager Johnny Angel managed to pack all stuff and get the band in the truck on time for the first in personal slept as much as i could ,i woke for soundcheck, when i came back Sunday i saw the studio i bit messy i would say we has a great time. 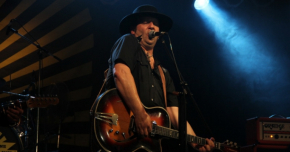 The big night election day and filming the show once again with 5 cams and multi-track, i went to bed after arriving home, but regrets i should have stayed just a bit longer, to make sure DC Washington and EK would do the same, next day and found them in the bar at 1400 hours.

We ended up arguing on stage during sound-check nobody could chat up, while checking the monitors, so i quit the sound-check and put them to bed, there was no reason to continue.

Shows like this is either very good or very bad, this one turned out real good, i just listing to the recording it works well, after the show there was short but heavy party, i was in need of sex, but my wife did not like my condition, so i slept with a hard on till the morning.

I lost the election so no longer a politician.

It was hard to get out of Riga all the band members meet there girlfriends and slept in there own beds, i took forever to leave, it seemed like too much satisfaction, the muscles we loose on Burkewitz, he was quiet as a lamb with shoulders.

We ended up spending 7 hours on the road and only made it to Kleipeda at 21.00 for a sound-check. I think the Mary Ann tobacco also made everything move slow, and the breakfast served was Mary Ann tobacco.

There was a good amount of people, Lord Josef Bishop opened up for us this time and did jazzy/bluesy show, we followed up with a rocky program, it was a good night, the owner got drunk before we were done and went home, that’s a good night, we also got invited to play at his Festival 27th July. 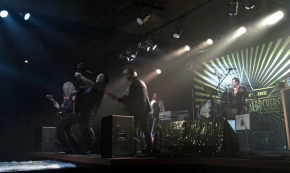 3 bands on the program us Rebel Riot and Lord Bishop, the place was nice people came late but the place was well packed before showtime a good crowd who were there for the reason of Rock’N Roll, all the bands played real well this night, so it was necessary to celebrate.

Smoking some strong Mary Ann tobacco knocked out most of us and we ended up eating burgers in Fontaine Delisnack, Riga checking out the quality, we did not smoke Mary Ann for a while, so it had it’s impact, it just would not go away, i felt stoned even the next day.